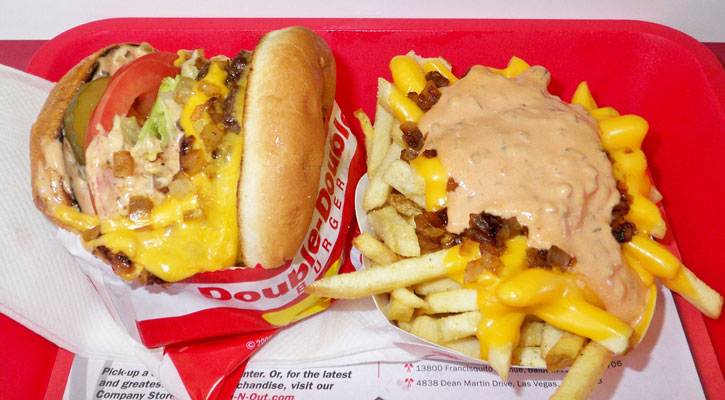 Many people don't know about some of the interesting items offered at restaurants.

Many restaurants have a lot of variety when it comes to food. With so many choices, it may come as a surprise that some restaurants also have items that aren’t even on their normal menu, but are on a secret menu.

A secret menu at a restaurant is a menu with certain foods or beverages that are not posted for just any customer to see when they come in. Restaurants like In-N-Out Burger popularized the secret menu. In-N-Out Burger is a major west coast food chain. It is one of the few restaurants with a widely known secret menu. They have many items on it including the Animal Style (burger), Animal Style Fries, and the Flying Dutchman. With its wide variety of choices, it has one of the most unique secret menus.

Chipotle is a chain restaurant found all across the United States. They have many items on their menu spanning from burritos to quesadillas. Everything at this restaurant is handmade. The Wallstreet Journal said, “Chipotle is diligent about making sure yesterday’s food doesn’t end up on today’s menu.” The most popular secret menu item at Chipotle is the Quesarito. It is a burrito wrapped in a cheese quesadilla. That is the best of both worlds. You get a quesadilla and a burrito in one!

Not only does the restaurant have a secret menu, they also partner with other brands for its items. Taco Bell has joined itself with companies like Microsoft and Doritos, with doing Microsoft’s Xbox giveaways and Doritos by making Dorito tacos. One company that some don’t know that it partnered with was Marvel. Of their many items on the secret menu, two stand out from the rest: The Hulk and The Incredible Hulk. If you add guacamole to a bean and cheese burrito, they call it, The Hulk. The Incredible Hulk is the same thing, just bigger.

Carl’s Jr.and Hardee’s is a fast food chain. The reason there are two names is because the name of the restaurant depends on where you live.Carl’s Jr’s are located along the West coast and the Southwest, while Hardee’s is along most of the East coast and South. They are a burger and fries restaurant. The main attraction on their secret menu is Carl’s Jr. Chicken Stuffed Super Star Burger. It is a massive sandwich that has two hamburger patties with a spicy chicken patty between them. It is a gigantic sandwich that looks like it could feed a family of three.

Sonic, a noticeable, 80’s looking diner because of the design style, has a large menu of classic diner foods such as burgers, hot dogs, and shakes. On their secret menu, though, they have some interesting foods like Pickle-O’s, Purple Sprite, Extreme tots, and their most popular: the Frito Pie. The Frito Pie is Fritos covered in chili and nacho cheese. It’s like chili cheese fries but instead of french fries, it’s made with Frito’s. It’s a messy masterpiece.

Chick-fil-A with its well known chicken restaurant with people who rave about it. Not only do they have a large menu, they have a lot of secret menu items. From a fried chicken club to a root beer float, their secret menu is immense with items. The most popular item is a buffalo chicken sandwich. It’s their classic chicken sandwich drenched in buffalo sauce. That is only one of the many items on their secret menu, they also have a Double Decker Sandwich, Cheese Fries, and a Chicken Bacon Ranch Deluxe.

Overall, secret menus are interesting ideas that are probably pretty good marketing techniques. They can induce people to come and try different food they have. It gives a whole new experience to some of these restaurants.