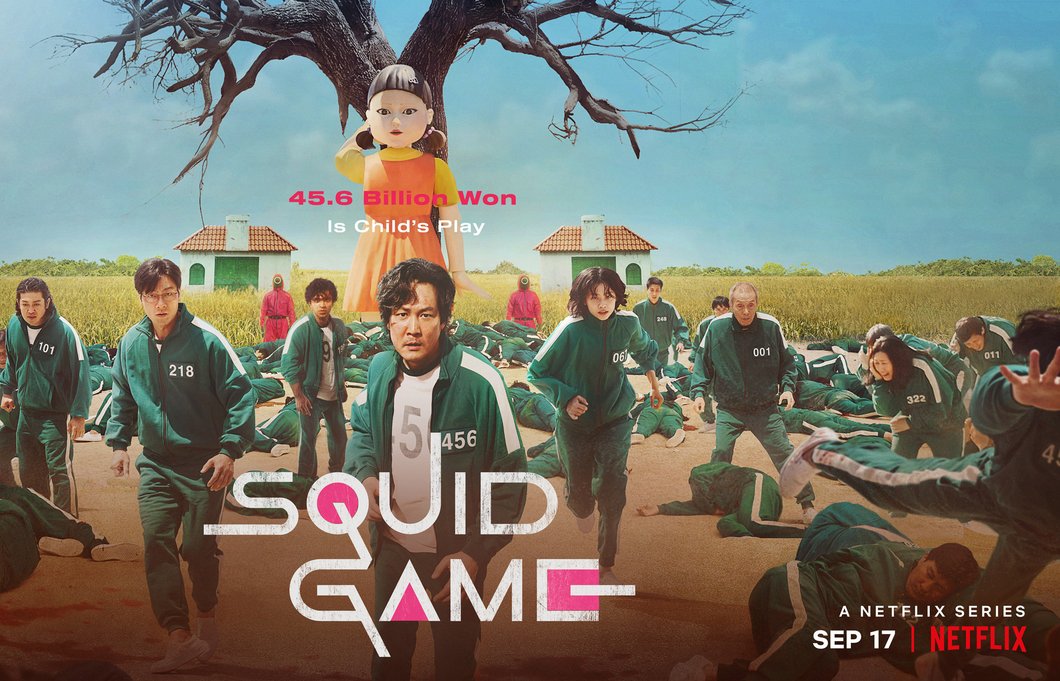 Everyone is talking about it. Netflix’s new series, Squid Game, might just be the biggest show of all time, according to Netflix co-CEO, Ted Sarandos. Written and directed by Hwang Dong-hyuk, this South Korean masterpiece manages to take the world by storm for many reasons, such as its simple yet mind blowing storyline, creative directing, and superb cliffhangers. This nine episode thriller manages to captivate audiences with its baffling plot, despite its extremely gruesome scenes.

Squid Game starts off by following the life of Seong Gi-Hun, a divorced father struggling to maintain a relationship with his daughter who barely has enough money to take care of his sick elderly mother.

One day, a mysterious man in a suit approaches Gi-Hun with an offer in a train station. The man offered Gi-Hun to play a series of childhood games. If Gi-Hun wins the games, he wins a whole fortune of money. Gi-Hun, a person struggling to make ends meet, willingly accepts the offer along with 455 other people facing similar issues as Gi-Hun. However, if the contestants lose a game, their lives are on the line.

Dong-hyuk’s directing in this TV series is phenomenal. Dong-hyuk manages to direct a TV series from which viewers can’t look away. Its thrilling storyline keeps viewers at the edge of their seats, despite the gruesome and bloody scenes.

Dong-hyuk’s brilliant writing in this series is very compelling. He manages to create a unique take on two central themes throughout this TV series: the struggles of being in poverty and the brutal reality of adulthood.

A theme Dong-hyuk has superbly expressed is the struggles of being in poverty. In one of the episodes, the competitors get to vote on whether they should continue to play the games after discovering that their lives are at stake. After voting to leave, they returned to their normal lives, back to the hardships of living in poverty. When they realized that their lives outside of the games were miserable, many of the competitors decide to return and continue to play the games in hopes that they could win the large cash prize.

Dong-hyuk decided to use lots of violence in this series. When watching Squid Game for the first time, some people may be pretty appalled to see lots of bloodshed during the first game, Red Light, Green Light. It is brilliant and pretty ingenious that Dong-hyuk decided to do this because the goriness of this series further amplifies the second central theme of this show, the brutalities of adulthood. By using this strategy, Dong-hyuk captivates his audience in this gripping TV series. All things considered, this shows how Dong-hyuk has a very creative and inventive directing style.

Throughout the series, I was very captivated by the performance each of the main characters gave. Not very often do you get a TV series in which each actor gives a very strong performance.

Starting off with a character who had a subtle performance is Sae-Byeok, played by HoYeon Jung. Personally, I felt her character’s story was the most unique because she struggles to make money as she attempts to bring her family over from North Korea while maintaining a relationship with her younger brother in Seoul. Jung manages to win the audience with her stellar performance. I was shocked to find out that Squid Game was Jung’s acting debut. Despite her lack of experience, her portrayal of Sae-Byeok in Squid Game proves her undeniable gift in acting.

Although several of the actors in the series portrayed their characters in a non-dramatic manner, there are many other characters who went over the top with how dramatic they were, which creates a perfect balance between the subtle and dramatic acting. Overall, this balance between the two types of acting makes the show very intriguing for the audience.

Although Squid Game features excellent directing and acting, one thing that is lacking in the series is the screenplay. For the most part, the screenplay in this series is average. However, when it comes towards the end, new characters are introduced. When the characters, the VIPs, were introduced, they were speaking in English, compared to the other characters who were speaking in Korean. When it came to the VIPs, the screenplay was cheesy and borderline cringy and annoying. I’m not sure if the screenwriters were inconsistent with the English and Korean, but this played a major factor in the series. If the overall screenplay was just as good as the directing and acting, Squid Game would have been a perfect 10/10.

Overall, I thoroughly enjoyed watching Squid Game. I was at the edge of my seat as each episode got progressively better and better. Squid Game is perfect for those who have the stomach to handle this violent yet suspenseful TV series. In addition to the directing and acting, there are many other things that make this series stand out, such as the vibrant and nostalgic production set, the eerie music, and, most of all, the gripping twists of the show.

For those interested in watching this series, I would highly recommend watching it in Korean with English subtitles on. This way, you get fully immersed. Although this binge-worthy series is something new and refreshing Netflix has recently released, Squid Game is absolutely not recommended for younger audiences as it features lots of violence, foul language, and nudity. Despite this, Squid Game is a smash hit and a global sensation.