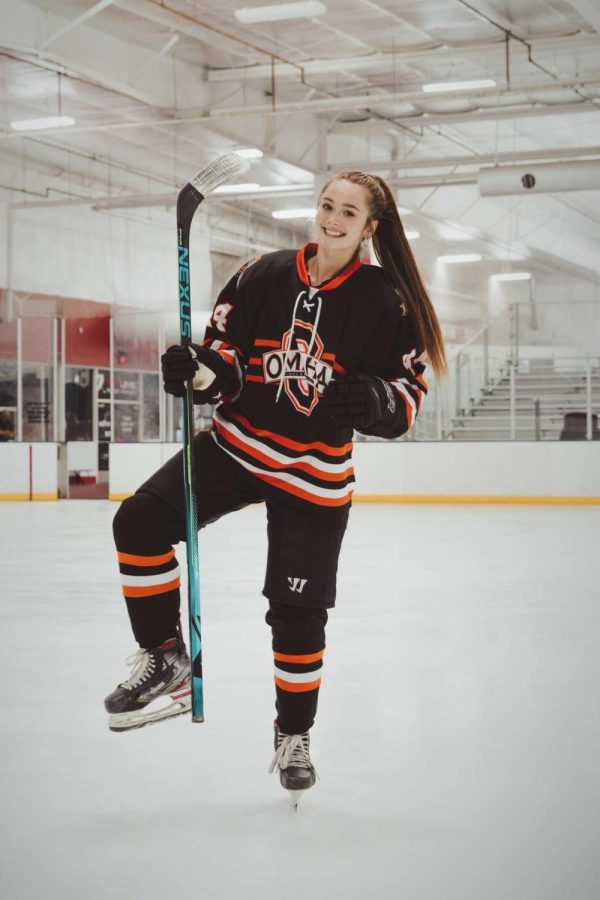 A photo of Saldi in her hockey uniform.

Saldi on the Ice

For any high school student, sports are a time consuming part of life; but for Natalie Saldi, this commitment level is taken even higher. Playing a year-round sport that requires weekly travel is a sacrifice to the common high school experience, but worth it for Saldi and the big dreams she has for her hockey career.

Saldi was introduced to the sport of hockey through her family at a young age. “My dad and brother played hockey, so I started when I was 8,” Saldi said. From then on out, her love for it has grown exponentially, making hockey a major aspect of her life to this day.

The commitment Saldi has for her sport is directly reflected in the amount of time she puts in.

During the week, practices are two hours nightly along with a four hour practice on Tuesday. On top of twelve hours of practice a week, almost every weekend in Saldi’s schedule is reserved for hockey tournaments.

“I am gone pretty much every weekend so I miss a lot of Thursdays and Fridays, sometimes even Mondays,” Saldi said.

Because Saldi’s hockey team is not affiliated with Elkhorn North, her situation is a little different than the average high school student athlete.

“It is definitely hard to balance school and hockey. It’s a lot of commitment so I have to come in a lot in the mornings to take tests or do things I missed,” Saldi said.

Michigan, Colorado, Wisconsin, and Kansas, are just a few of the states Saldi has played hockey in. “We pretty much travel everywhere. We barely play in Omaha,” Saldi said.

To add onto this time commitment, hockey is essentially a year round sport. Being the length of an average school year, it starts in August and ends in May with camps happening in the summer months.

“When I am not playing hockey I like to spend time with my family. We don’t get a lot of time for that since both me and my brother play hockey,” Saldi said.

Saldi plays left wing on her team. The group consists of 19 girls who have played together for years, making them a close-knit squad. “My team is like a family,” Saldi said.

Her biggest accomplishment in hockey has been being invited to a top 60 players event for 05’s in the country. This is a large achievement for Saldi as this means she is one of the best players for her age group on the national scale.

Saldi also believes that hockey is commonly seen as a male-dominated sport.  “A lot of the girls are coming together to play hockey in Omaha which is really fun,” Saldi said.

Saldi lives a different life from the normal high school student athlete, but she wouldn’t want it any other way because of her love for the sport of hockey.