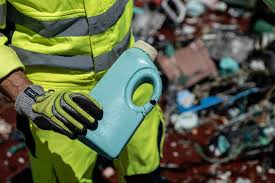 Plastic getting sorted from the trash pile they pulled out of the ocean. (Photo by businessinsider.com)

Plastic getting sorted from the trash pile they pulled out of the ocean.

The Ocean Clean Up

What once was impossible is being accomplished by the help of scientists and society.

For the past few years, plastic pollution in the ocean has become increasingly worse and society’s view to decrease polluting our oceans has increased.

Tons of plastic end up in the ocean everyday ranging from straws to plastic bottles. This mainly affects wildlife and their habitats that they are living in. Animals are in imminent danger, living in a new atmosphere that they are not meant to live in which causes them to consume plastic and swim in filth.

Oceanatic birds believe that plastic is a food source and baby turtles swallow micro pieces of plastic. Oftentimes, larger pieces of plastic tend to wrap around animals’ fins or heads, making it very difficult to live and function.

Everday use plastic ends up in landfills or in the ocean as it is lightweight and is easily blown by the wind; Consequentially, about 8 million tons of plastic end up in the ocean. Thus creating what is called the Great Pacific Garbage Patch, an island of plastic in the middle of the ocean.

One major organization, known as the Ocean Cleanup, is a group of scientists working together to create a successful rig to clean up the island. It was said before to be near impossible to do yet they have been doing test runs of the rig and had their first successful attempt not too long ago on October 2, 2019. Their newest model, named “Jenny,” has been the most successful and least flawed.

Guided by two boats, the half-mile-long installation works by catching large and small debris from the seawater in a funnel-shaped net. Once Jenny is full of trash, workers empty the plastic onto the boat before taking it ashore to recycle. The plastic is then reused to create other products that are less harmful for the environment and won’t end up back in the ocean, for example they can be made into towels or bracelets.

The world has not completely turned a blind eye to this immense issue. Countries all over the world have made changes to their daily lives to stop the spreading of plastic pollution. A good place to start is by stopping the usage of single use plastic.

For instance, Sea World has banned plastic bags, straws, plates, water bottles, and many more to try and limit plastic use in their parks. Starbucks has changed their cups they use and eliminated straws and encourages people to use reusable cups instead of the plastic ones. They give out and even give a discount if people use the reusable cups.

Canada with one of the longest coast lines has started the ban of single use plastic since the occurrence of washed up whales with their stomachs full of plastic. Trudeau did not specify the products to be banned, but said likely candidates include plastic bags, straws, cutlery, plates and stir sticks.

Overall, plastic pollution will forever be an issue unless we all act on it to make a change. One organization at a time, things will slowly get better. Hopefully one day plastic will be easily manageable and make the quality of life better than what it is now.