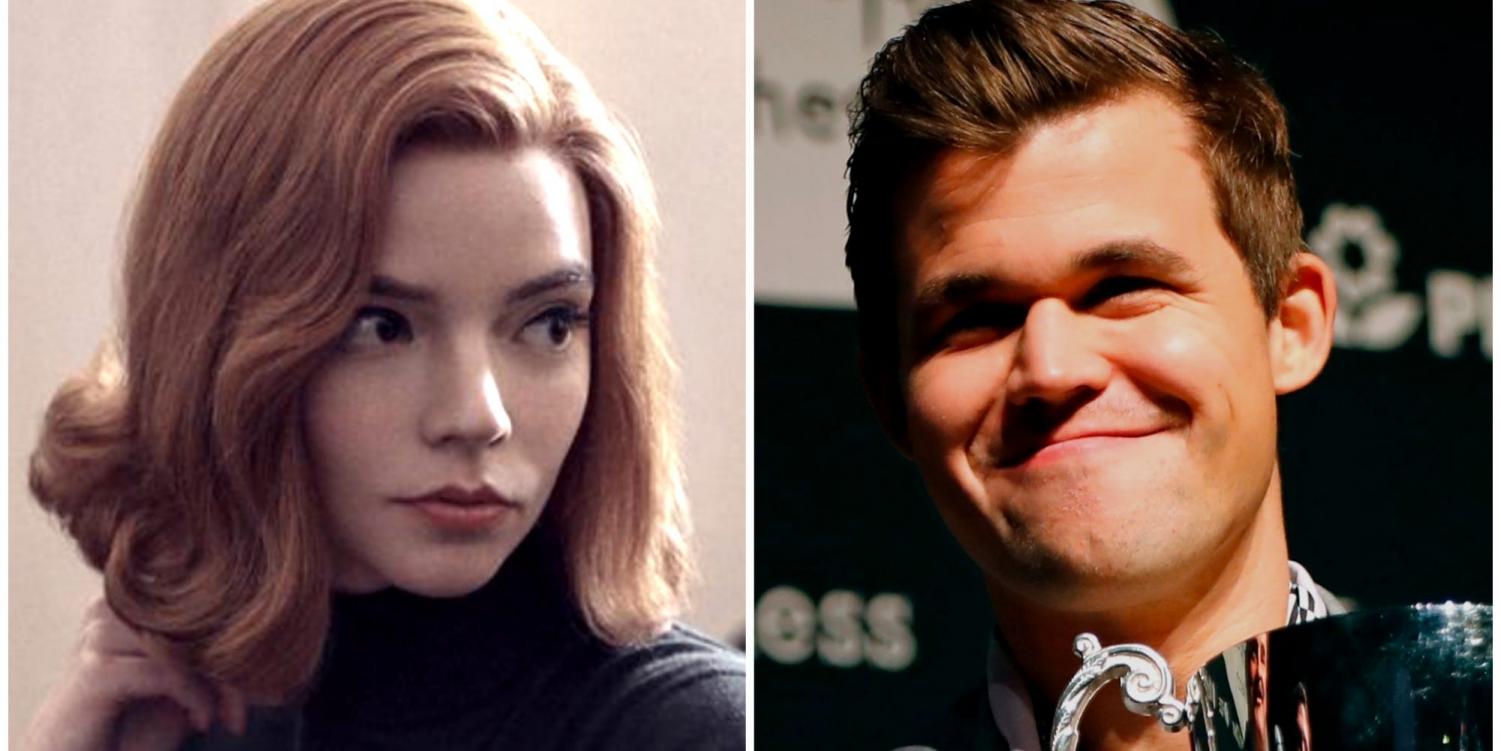 Taking a look at the similarities between the worlds best chess player and The Queens Gambit.

Chess… It’s a centuries-old game. Uncertain of the location chess started, chess is believed to have been created in the 6th century CE. According to Britania, modern chess we know today has been around since the 15th century CE.

In the game of chess, the chessboard consists of ranks (rows) going side to side labeled A-H, and files (Column) labeled 1-8. The pieces include pawns, rooks, knights, bishops, king, and queen for both sides of the board. More advanced players use algebraic notation to determine where all the pieces are (Nxd3, kf6, Bxh4, Qa5, etc.).

In March of 2020, chess went viral on sites such as Youtube and Twitch with popular content creators because of the COVID pandemic. Streamers like GM Hikaru Nakamura now average around 20,000 viewers and gain hundreds of thousands of dollars a month from streaming chess to a large audience. The timing for the release of The Queen’s Gambit was perfect.

The Netflix limited-series, The Queen’s Gambit, is a Drama following the story of Beth Harmon. She is a young orphaned girl who is gifted in chess and goes on to try and prove that a woman in the 1960’s can beat men. She faces many opponents in the show, including Harry Beltik, Benny Watts, and Vasily Borgov.

The show released on the 23 of October 2020 and it was an immediate hit. People who did and didn’t enjoy chess couldn’t stop watching the show. According to IMDb, The Queen’s Gambit remained on the top 10 shows to watch until mid-December of 2020. That is almost 2 months of the show being out.

The 83rd Tata Steel Chess tournament held in Norway was the first in-person chess tournament in 2021. Big names like Fabiano Caruana, Magnus Carlsen, Anish Giri, and Alexander Donchenko all faced off in this tournament.

Magnus Carlsen is the world champion in chess. He has held that title since 2013. According to the guardian, At the age of 14, he became the youngest chess grandmaster in history. At the 4 World Championships he played at between 2013 and 2019, he wiped the board, winning by a major amount.

Magnus Carlsen and Beth Harmon are more similar than people may think. In a Youtube video posted to Magnus Carlsen’s channel, he reviewed The Queen’s Gambit and said, “Beth Harmon plays similar to me, I’m flattered. We are both players who keep pieces close together,”

There are rivalries with both Beth Harmon and Magnus Carlsen. Magnus’s biggest rival is Fabiano Caruana. Fabiano Caruana is an American who in recent years has been known for putting up a fight against Magnus. Both go neck and neck, but Magnus always ends up beating Fabiano. Many call Magnus, “The greatest chess player to ever live”.

Beth’s biggest rival in The Queen’s Gambit is Vasily Borgov. He was a player for the Soviet Union in the 1960s. They portray him in the show as unbeatable and menacing. Betty Watt in the show is quoted saying, “They eat Americans for breakfast there”. This shows how they portray the USSR chess player.

Andrey Esipenko is an 18-year-old Russian prodigy chess player for Russia. In the Tata Steel Chess open, he became the first teenager to beat Magnus Carlsen as a world champion. In the interview following the win, Andrey Esipenko was asked if he had any plan for the following day after he beat Magnus and the teenager responded very happily with, “I think I will go to the supermarket”.

With chess growing in popularity and The Queen’s Gambit being wildly successful, it proves that a century-old game doesn’t always lose popularity. It also shows that Netflix can take risks on shows because of how well The Queen’s Gambit did and because it was nominated for 2 Golden Globes.