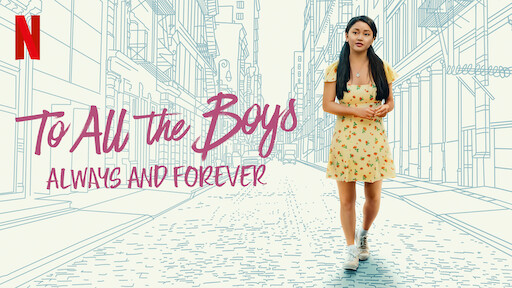 A poster debuting the movie. (Photo by netflix.com)

A poster debuting the movie.

Movie Review: To All The Boys I’ve Loved Before: Always and Forever

A look at one of the hottest teen romcoms!

The series kicks off with To All The Boys I’ve Loved Before and focuses on the main character, Laura Jean, on her adventure through high school and figuring out teen romance. Lara Jean blends in with the crowd and sticks close to her best friend, Chris. Until one day when her little sister, Kitty, mails out all her love letters she wrote to her crushes growing up. One of the letters was to the most popular boy in school, Peter Kavinsky, who happens to be fresh out of a relationship. To save Lara Jean from embarrassment and to prove to Kavinsky’s ex he is over her, they agreed to fake date. They go through a series of multiple events that, in the end, make them fall in love with each other.

The plot of the latest movie was based on a cute, teen romance following the theme of the previous two movies. Yet, this one took on more of a mature tone with the over-looming future of college. With the fast approaching end of senior year, the teens are trying to make the most of their year.

From fun, senior trips to New York to dancing the night away at prom, Lara Jean and Peter Kavinsky tackle the whirlwind of senior year and the added stress of college on their relationship.

I liked how the movie was a little more mature with the talk of college and the impact it would have on their relationship. Lara Jean grew up a little bit in this movie and wasn’t as childish as she was in the second movie. We saw Lara Jean and Peter be more serious which isn’t something usual for the pair, as they are often goofy with one another. The acting could have been a little bit better and they really over exaggerated the silly, light hearted scenes. All in all, it was a nice refresher from the usual “fairy tale” love stories and was more realistic.

Comparison to the Book:

It is to no surprise that the book is different from the movie. One of the biggest differences between the book and movie is where it takes place. In the movie they’re in Portland, Oregon while in the book they are in Virginia. This then causes the colleges to which Lara Jean applies to differ in the movie as well.

Also a notable change from the book to movie is that there are missing characters in the movie. For example, some new friends were introduced in the book and some had passed away in the retirement home at which Lara Jean worked. Margot’s college boyfriend, Ravi, wasn’t even mentioned in the movie.

While the trip to Korea did happen, it was after their senior trip to New York and Peter tagged along with them. Instead of Dan, Lara Jean’s dad, proposing after the trip, he proposed to Trina on a hike where Peter and all of them hid and recorded it all.

Peter’s mom had a huge impact on their relationship in the book while she was nowhere to be seen in the movie. In the book she strongly encouraged Lara Jean to end things with Peter so they can both focus on the future. She makes Lara Jean wonder if she and Peter should really be together in college.

Lastly, in the book they had two senior trips, one after graduation called Beach Week and one to New York. Beach Week is when Lara Jean and Peter end up breaking things off with each other after a huge fight. However, they get a second chance at the wedding which didn’t exactly happen in the movie. While Peter and Lara Jean did get back together, Peter attended the wedding in the book.

Even though there are big differences between book and movie, I really liked it. The first time I watched it I thought the acting was a bit cringey, but after I re-watched it with friends it was a bit of a tear jerker at the end. I would definitely recommend this movie to anyone who likes rom coms or teen dramas. It made for a wonderful Valentine’s Day movie and I will be watching again!