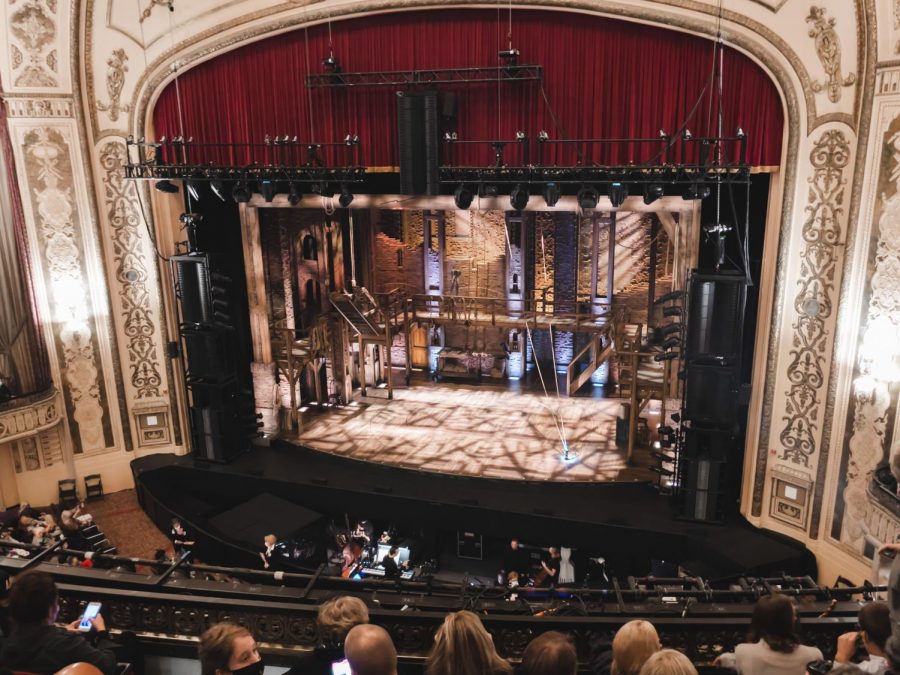 The set of Hamilton is a stage built on top of a stage. The complex set features a spinning floor that is used multiple times throughout the performance.

From Broadway to Omaha: Hamilton is Definitely Worth It

Hamilton, a musical on Broadway for six years, came to the Orpheum Thatre.

From opening night on Broadway in August of 2015 to November 2021, Hamilton has had more than 2,000 performances, so what is it like now? Hamilton tells a story of our founding fathers’ history, as well as entertains the public. It focuses on Alexander Hamilton’s role in founding our nation and his life story.

Hamilton has been extremely successful and now I can see why. It has an iconic atmosphere and there are so many different things that go into the production of it that has made it so good. Not only are the actors insanely talented, but all of the behind the scenes from the set and props to the lights and music were very well done.

To begin with, the music, the soundtrack of Hamilton has always had a good reputation and is popular in and out of the third. There is a tone to the music that is recognizable anywhere and makes them so well known. I’m going to be honest, it took me almost the whole performance to realize that it was actually a live orchestra. The music was so good and there were no obvious mistakes. It wasn’t until I actually saw people in the pit that I realized it was a live soundtrack.

Secondly, the actors. Each actor is chosen carefully and is chosen to play the character that their natural personality fits. Hamilton has also developed a system of double casting some actors which has been very effective on the writer’s part. Not only is it fewer people that have to travel with the show, but it also provides a way for the audience to feel like they already know a character, even if it is the character’s first appearance in the show.

Continuing on with the actors, they were very well chosen in this cast. Granted the original casts always seem to be the best and most familiar, this cast did a phenomenal job. The actors fit their role and were able to show a connection with the audience even if they didn’t address them specifically.

The set of Hamilton is an iconic piece, even though the set stays stationary the whole show, it still provides an atmosphere that is easily identifiable. Based on the lighting and the expression the set can be easily transformed from an outdoor to an indoor space without even moving. It is a very impressive piece of art that provides a consistent feeling throughout the show.

Before I begin giving my thoughts and critiques on lights and sound I will preface this with this is an area I work in every day so it is very important to me. Especially in a show of this magnitude. I will also say that granted this varies from performance to performance, this is what I saw.

First off, the lighting, the lights were phenomenal. Lights would turn on and off to the beat of a song keeping a certain pace and the color would reflect the mood and character in the scene. The spotlights also kept the audience’s eye on the most important part of the scene and made everything else flow around it.

The lighting experience for me was absolutely amazing. There were definitely a few times that the lighting was out of sync with what was happening in the scene or the music. The spotlight work was also extremely good, however, there were times that the movement was choppy or the spot came in late. Otherwise, the lighting didn’t take away from the overall performance, it just added atmosphere.

Lastly, sound. The sound plays a crucial role in any performance because it allows the audience to hear what’s going on. The importance of sound is pretty self-explanatory and with that being said, how was it for me?

Well, the sound was so good that it wasn’t even noticeable, except for a few times. There was one noticeable time that a microphone wasn’t turned on until halfway through a line which threw the audience out of the story for a line or two. There was also a time or two where the audio was so loud that it was clipping. This means that the audio was not clear and didn’t sound great for a few minutes every now and then.

Overall, Hamilton was great. It had a memorable atmosphere and iconic feeling. The story is told very well while entertaining the audience. Nothing about the performance felt unnatural and everything flowed. I would definitely go see it again and I would recommend going to see it with any chance you get.