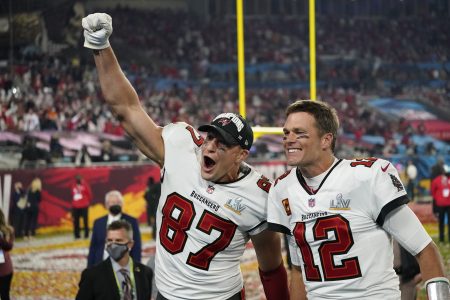 It was a game no one expected. The fans came into it thinking they would see a back and forth burner right to the end.  It was two explosive offenses. A rising star versus a twenty-one year veteran. The future of football versus the greatest quarterback of all time. Mahomes and Brady. Chiefs and Bucs. And the conclusion to maybe the most unprecedented season in the history of the NFL.

It was far from what everyone expected. Most people wanted to see a high scoring shootout between two of the best quarterbacks and offenses in the NFL. Instead, it was a showing of domination from the Buccaneers who torched the Chiefs’ defense and held their offense to no touchdowns and just nine points on three field goals. Tom Brady yet again demonstrated that age is just a number in what ended up being a 31-9 victory for the Buccaneers.

The game started off with the Chiefs’ defense looking like a force as they held Brady and the Bucs to a three and out and a punt.

The Chiefs got the ball and Patrick Mahomes ran the ball for a first down, but the Chiefs were then stopped and had to punt for only the second time of the postseason.

The Buccaneers had another bleak possession and the Chiefs got the ball back on a drive in which they marched down the field and took the lead 3-0 on a Harrison Butker 49-yard field goal with 5:10 to go in the 1st quarter.

Then Brady answered with an attack right to the throats of the Chiefs’ defense. He connected with Mike Evans, Antonio Brown, and Cameron Brate, which is just a portion of the best receiving corps in the NFL, to take the ball inside the 10 yard line. He then found old faithful Rob Gronkowski who took the ball in the end zone. Ryan Succop hit the extra point and the Bucs went up 7-3.

line. But the Kansas City defense rose up on fourth and goal and forced a stop.

After a short drive for the Chiefs, Brady and co. came onto the field and scored on another touchdown to Gronkowski as they caught a few breaks from some Chiefs penalties.

On the ensuing drive, the Chiefs were able to muster another field goal by Butker after some passes to Travis Kelce and a couple runs from Clyde-Edwards-Helaire.

With a minute left, Brady and the Buccaneers’ offense found a way to score on an Antonio Brown touchdown after a couple pass interference calls on the Chiefs yet again gave the Bucs an easy drive to take the lead 21-6 at the half.

After The Weekend delivered the halftime performance, Kansas City got things going with solid runs from Edwards-Helaire and Darrell Williams. Unfortunately though, they again couldn’t put the ball in the end zone and had to settle for another Butker field goal which made the score 21-9.

Tampa Bay running back, Leonard Fournette, ran the ball with ease on the next drive and pounded the Chiefs’ defense on a 27 yard run to make the score 28-9 with 7:45 to go in the third quarter.

Shaquil Barrett of the Buccaneers, who was a nightmare for the Chiefs’ offensive line all night, finally got to Mahomes for a big sack the next drive. On third down, pressure from the Bucs forced Mahomes to throw on the run that was tipped by Mike Edwards and intercepted by Antoine Winfield Jr.

The Bucs hit a quick field goal from Succop and the Chiefs got the ball back with work to do, down 31-9. They drove down the field impressively, but were stopped yet again on a fourth down try as the Tampa Bay defensive line relentlessly pressured Mahomes.

Brady and the offense came back onto the field and drained the clock. The Chiefs got the ball back with eight minutes to go, but the Buccaneers’ defense chased Mahomes into another incompletion on fourth down.

Super Bowl 55 soon went to the Bucs and Tom Brady in his 21st season in the NFL. He has now won seven super bowls and appeared in ten, and has more super bowl titles than any other player or team in the NFL. The Buccaneers defeated the Chiefs 31-9 for their first super bowl win since 2003.

The Chiefs, on the other hand, struggled. They didn’t score a single touchdown which is very uncommon for their explosive offense. The offensive line was torched time and time again, and could not allow for Mahomes to sit in the pocket to deliver good passes. On top of that, the Chiefs’ receivers had one too many dropped passes, and the defensive secondary was far too handsy and were called for several pass interferences.

But Tom Brady and the Tampa Bay Buccaneers, along with head coach Bruce Arians, reign as Super Bowl champions and as of right now, they should have most of their team back next year which could prove deadly for many teams. On the flip side, the Chiefs will return most of their players next year as well, meaning the fans could get what they want: another super bowl between Tom Brady and Patrick Mahomes.